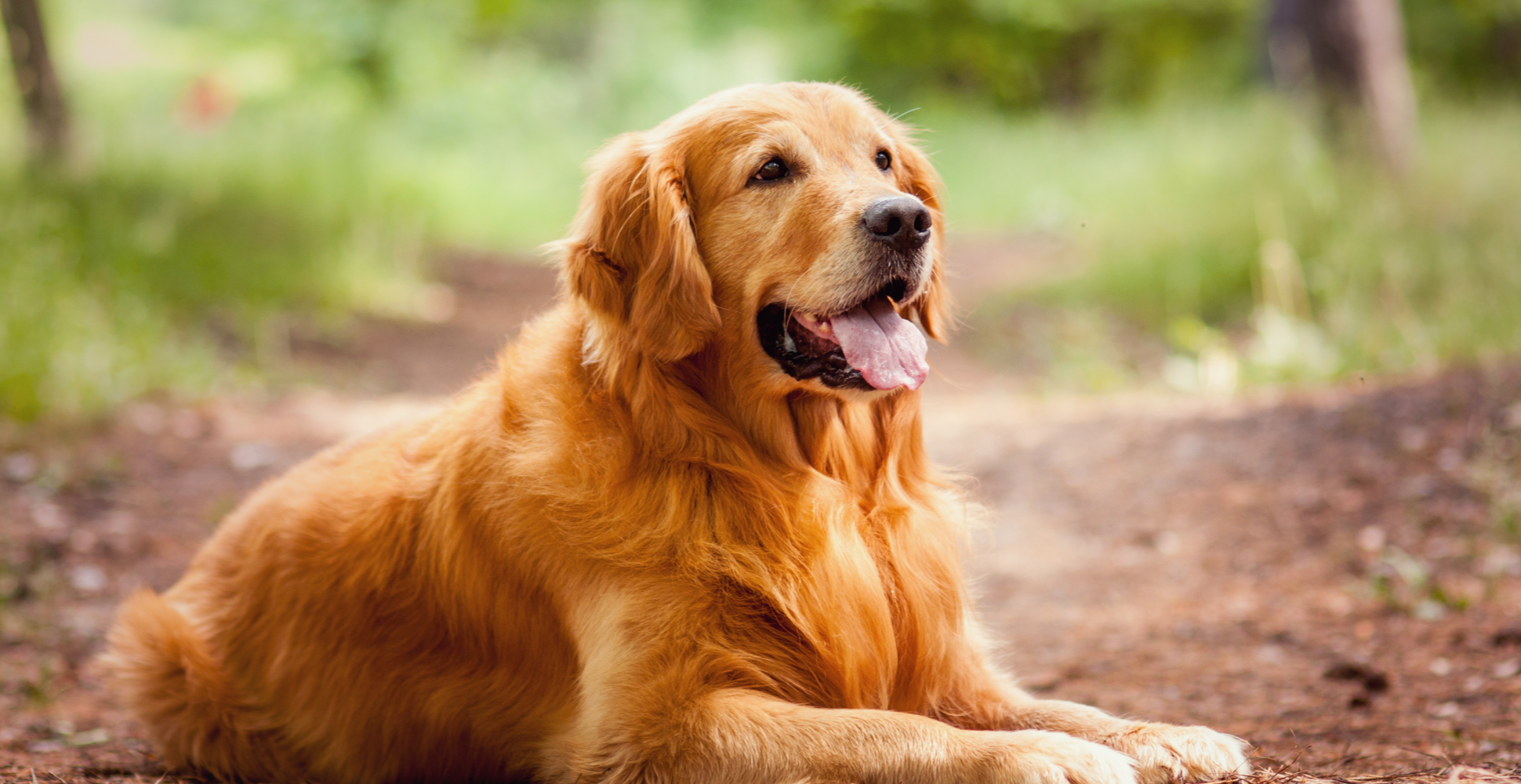 About The Golden Retriever

The Golden Retriever is a popular choice of dog and for good reason. Their combination of playfulness, intelligence, and gentle nature makes them a great family companion, particularly for those with young children. Golden Retrievers are best known for their dense golden coats, which can vary in shade from very pale cream to dark red rust. Their feathered tail is usually upright and wagging, a hallmark of this happy dog.

Bred originally as a gundog to retrieve game, this trait is reflected in their name. Goldens are excellent at retrieving, whether it be game out on a hunt or a toy from the garden. They have a lot of energy and require a high level of daily exercise. They are known for being a playful breed, described by some as an eternal puppy, even well into old age!

They love nothing more than to please their human companions and this trait makes them relatively easy and rewarding to train. They are highly intelligent animals and require plenty of mental stimulation in addition to their daily exercise. This is a breed that often loves to get muddy and wet so is not a good choice of dog for the house-proud!

The Golden Retriever was first bred in the highlands of Scotland at ‘Guisachan’, the estate belonging to Dudley Marjoribanks (titled Lord Tweedmouth) in the late 1800s. Wildfowl hunting was a popular sport with the wealthier members of society, but the existing hunting dogs were inadequate for retrieving shot game from water as well as land. This was a problem because the hunting grounds of the highlands were full of marshland and rivers, so Marjoribanks set about breeding a dog that could retrieve from water and was better suited to the Scottish climate and landscape.

In 1865 Marjoribanks purchased ‘Nous’, a yellow dog from a cobbler in Brighton. Nous was the only yellow-coated pup from a litter of black wavy-coated retrievers born the previous year. He had originally been given to the cobbler by a local gamekeeper to settle a debt. Nous was brought back to Marjoribanks’s estate and bred with ‘Belle’, a Tweed Water Spaniel (a breed that is now extinct). Matings between the pair in 1868 and 1871 resulted in several yellow-coated puppies, the first in the line of the Golden Retrievers that we know and love today.

Records of these puppies and subsequent litters were kept at the kennels at Guisachan and now can be found in the Kennel Club library. Nous and Belle’s offspring were subsequently mated with Wavy and Flat-Coated Retrievers, an Irish Setter, and another Tweed Water Spaniel. Marjoribanks used mainly the yellow puppies, but also the occasional black puppy, to continue his line. He selected them for their excellent working ability and these yellow retrievers became known as ‘the gentleman’s gundog’.

These dogs were energetic and powerful, had excellent swimming ability, and most importantly, gentle mouths so as not to mark the game they were retrieving. All of the dogs used in the ancestral line were sporting dogs which was in-keeping with Marjoribanks’s aim to breed the ultimate hunting dog.

In 1903, Golden Retrievers were first registered with the UK Kennel Club as ‘Flat Coats – Golden’. It wasn’t until 1911 that they were recognized as a breed in their own right and were registered as ‘Retriever (Golden and Yellow)’.

To this day, Golden Retrievers are still used for hunting purposes, but it is some of these original traits that were selected for that make them so adept at many other activities including obedience, Guide Dogs, search and rescue dogs, and indeed family pets.

Golden Retrievers are classed as a medium-sized breed and are of moderate build. Males are generally larger than females, reaching an adult weight of 65-75 pounds and a height of 23-24 inches (measured to the shoulder). Adult females weigh between 55-65 pounds and will usually measure 21-23 inches in height.

Golden Retrievers are without doubt one of the most social and friendly breeds of dog. They love human company and have a strong desire to please their human companions. This makes them a great choice of family pet and their gentle nature means they are usually well suited to living with children. Even the most laid-back dog will run out of patience eventually though, so it is important to always supervise any dog around young children.

There is no doubt about it, Golden Retrievers love to play. Whether it be a game of fetch, tug, or chase, this breed will always be a ready and willing playmate. Playing games is an excellent way to mentally stimulate these dogs, something that is just as important as the amount of daily exercise they receive. They are an extremely affectionate breed and once playtime is over, a Golden will love nothing more than to curl up with his or her family members for a cuddle.

Golden Retrievers are generally very easy-going and will usually adapt well to living with other animals in the household including cats. It is still important to supervise any new introductions and ensure that they go smoothly.

This fun-loving breed are also known for their patience and ability to focus on a given task. They are also highly intelligent and love to work. These are all traits that make them well suited to their use as assistance dogs and search and rescue dogs. Even as a family pet this means that they are easy to train, and what’s more, they enjoy the mental stimulation training provides.

Golden Retrievers are renowned for their beautiful golden coats, but they do require regular grooming to maintain their lustrous shine. Their coat is thick and has a double layer that naturally repels water, helping to protect their body from cold and dampness during and after swimming.

They are prone to shedding their fur year-round but twice a year will shed copious amounts of fur as the seasons change. For this reason, Golden Retrievers require regular brushing at least 3 times a week, but daily brushing may be required when they are in molt.

Some of these conditions are genetic and it is possible to screen breeding parents for these hereditary diseases to reduce the risk of passing them onto their offspring. Golden Retrievers are also unfortunately one of the dog breeds that most commonly suffer from cancer.

Keeping a dog slim and trim throughout puppyhood and adulthood is one of the best ways to help prevent some of these diseases. Regular check-ups at the vet are essential.

Golden Retrievers have an award-winning combination of high intelligence, an eagerness to please, and a desire to learn, making them an easy breed to train. They are well suited to first-time dog owners who may be inexperienced in training a dog.

They love to be taught new tricks and learn quickly which makes them a rewarding and enjoyable breed to train. They respond well to positive feedback and gentle training. This breed is highly suited to activities such as scent-work, obedience, tracking, and rally, whether just for fun or at a competitive level.

Golden Retrievers are not generally known for destructive or naughty behaviors, although as with any dog, appropriate house training is required. A mature adult Retriever can generally be trusted alone in the house for short periods. They have a deep loud bark and can be vocal, although are not usually excessively so.

Some Golden Retrievers are still trained as gundogs, but they are also used for a variety of other work, including service dogs for the blind, hearing dogs, and therapy dogs.

Golden Retrievers are active dogs and generally need at least 2 hours of exercise per day, some of which should be off-lead. As long as they receive an appropriate level of daily exercise, they do not need a large house in which to live although they will appreciate a reasonably sized garden.

An intelligent breed, they require a high level of mental stimulation to prevent boredom and frustration. Teaching them new tricks or learning a new activity such as scent-work or agility is an excellent way to provide this.

Goldens also love to play which is a great way to stimulate their brain and mentally tire them. Play also forms a strong bond between a Golden and his family members.

Golden Retrievers are prone to obesity so it is very important to feed a high-quality diet and weigh out their food daily. Feed them according to the food packet guidelines for your dog’s age and weight and weigh your Golden Retriever regularly to check he is not gaining weight. Your veterinarian will be able to advise you on a suitable diet and amount to feed your dog.

Obesity increases the risk of several of the diseases that Golden Retrievers are prone to, so ask your vet about your Golden’s weight every time you visit. 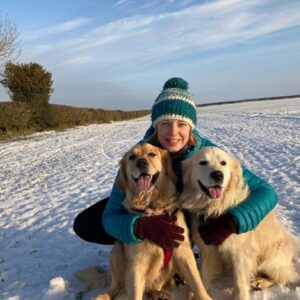 Gemma is an experienced small animal vet who combines her love of writing alongside working in practice. Since her graduation from the University of Liverpool in 2014 she has worked in a wide variety of roles including first opinion practice, as a night vet and as a locum vet. She has also spent time working at a charity clinic in the Cook Islands which was a challenge but also immensely rewarding. She loves all aspects of veterinary work, but she especially enjoys medicine cases and diagnostic imaging. Gemma spends her spare time hiking with her 2 dogs in the Yorkshire Dales and Moors near to where she lives.
Scroll to Top