The German Shepherd, known for their hard working and loyal nature, are now considered one of the most popular dogs in the U.K. Having been used within the Police Force for over 100 years due to their intelligence, many are now brought into our homes for protection when correctly trained. As a large and active breed, the German Shepherd’s diet is pivotal to their health. With that in mind, the following review will compare the 5 best dog foods for German Shepherds in 2022 and highlight their calories, suitability and ingredients.

New Pup only recommends products that we’ve tested, or significantly researched . This page contains affiliate links, that at no additional cost to you, may earn a small commission for the site. Find out more here.

Use the dropdown to sort the table by the feature that’s most important to you.

Acana Wild Prairie is a premium performance food that has been specifically designed with the needs of active breeds like the German Shepherd in mind. This exceptional quality food formulation is often ranked among the best dog foods for German Shepherds available for purchase today. Its main ingredients are all lean meat proteins including whole chicken and turkey and both chicken and turkey meal. Eggs and fish also play supporting roles in this top shelf recipe, ensuring ample amounts of essential fatty acids to support coat and skin health.

Acana Wild Prairie’s recipe includes not only meat, fruits, and vegetables but also organs, bone, and cartilage to ensure a well-rounded approach to nutrition. A grain-free food, this diet is the ideal choice for German Shepherds with skin and stomach sensitivities.

Pooch & Mutt Health and Digestion offers excellent quality nutrition to meet the German Shepherd’s every dietary need. This premium shelf diet is often recommended as one of the best dog foods for German Shepherds available for purchase today.

A diet that has been carefully prepared to assist dogs struggling with poor digestion, Pooch & Mutt Health Digestion is completely grain-free, placing a high emphasis on fruits and vegetables rich in dietary fibre to assist with optimal gut flora. Its main ingredient is salmon, a lean meat that is full of flavour and that contains an abundance of the essential fatty acids needed for coat and skin health.

Two powerful probiotics have been included in this diet to provide support for fluid digestive processing in the German Shepherd. Glucosamine and chondroitin are also found in ample quantities to boost overall joint health.

For a diet that offers excellent nutrition at a reasonable price point, it’s worth giving Wellness CORE Ocean Grain-Free a try. A high performance food that is consistently ranked among the best dog foods for German Shepherds, Wellness CORE Ocean Grain-Free makes the use of antioxidant and fibre-rich fruits and vegetables the priority of its carbohydrate content. These vital nutrients assist with the achievement of ideal digestion and a thriving immune system.

The main ingredient in this high quality dog food is salmon, a lean and flavourful meat that is reinforced through the addition of tuna meal.

AATU 80/20 is a top quality diet that owners can feel good about feeding their German Shepherd. Consistently recommended as one of the best dog foods for German Shepherds available for purchase today, AATU 80/20 proudly prioritizes a protein-rich recipe to fuel the nutritional needs of active dogs. Chicken is the foundation of this top shelf food formulation, a lean meat that is flavourful and easy for dogs to digest.

A designer food produced in the UK in small batches, this diet is free from artificial colours, preservatives, flavours, and GM ingredients, making it an excellent selection for German Shepherds with allergies. Each protein source included in this diet is cooked at a low temperature for a lengthy period of time to ensure the meat is easy for dogs to process and utilize effectively.

Lily’s Kitchen Natural Grain-Free Adult is a top shelf food formulation designed to support active breed dogs like the German Shepherd. A diet that places a high emphasis on a protein-rich recipe, duck, salmon, and venison are the trifecta of nutrient perfection that form the basis of this diet. One of the best dog foods for German Shepherds on the market today, Lily’s Kitchen Natural Grain-Free bases its carbohydrate content on antioxidant and fibre-dense fruits and vegetables.

Glucosamine and chondroitin are prominently featured in this powerhouse food formulation to assist with optimal joint functionality.

How to Select the Best Dog Food for German Shepherds

The elegant and athletic German Shepherd is a noble dog that has captured the hearts of many families worldwide. A dog breed also known by the name Alsatian in the UK and in some areas of Europe, the German Shepherd remains one of today’s most popular dog breeds.

The German Shepherd rose to fame when a puppy was found in a destroyed kennel in France in World War I. The gentlemen who found the pup, Corporal Lee Duncan, returned home to Los Angeles, bringing the pup with him. Here he began to train the pup, equipping him with the skills for life on the big screen. That pup was named Rin Tin Tin.

A dog of immense versatility, the German Shepherd is a dog that possesses great talent and excels at many different activities including as a service or therapy dog, police and military work, scent detection, and more. The breed is a happy worker and loves to learn new skills, making this dog a true joy to train.

The original purpose of the German Shepherd was to serve as a herding dog. However, as owners discovered the dog’s ability to assimilate new skills, its roles have extended as far as doing search and rescue work. Many German Shepherds were put to work assisting with trying to find loved ones at the World Trade Center following the 9/11 attacks. In addition to this role, the German Shepherd also provided comfort to those involved in the rescue efforts and the family members of those lost in this tragedy.

A breed with lots of energy to spare, the German Shepherd either needs a job to do or vast amounts of daily exercise at a vigorous pace. Dogs that do not receive an appropriate amount of exercise each day may develop nuisance behaviours such as persistent barking, digging, and chewing.

Intensely loyal to those it loves most, the German Shepherd will protect its home, hearth, and family with extreme vigilance. The breed is naturally wary of strangers and is not overly welcoming to new people entering its territory.

Though the German Shepherd most often enjoys good health, there are a number of different health problems that can plague this intelligent, athletic breed. These may include hip and elbow dysplasia, bloat, degenerative myelopathy, allergies, and exocrine pancreatic deficiency. Unfortunately, a good diet alone is not sufficient to prevent disease from occurring in any dog breed; however, the right food can help lay an excellent foundation for optimal canine wellness. The best dog foods for German Shepherds include supplements to help boost overall joint, heart, and skin health.

The ideal diet for the German Shepherd is comprised of approximately 18 percent protein and 5 percent fat.

To enjoy optimal health and wellness, the German Shepherd does best on a well-balanced diet comprised of the finest quality ingredients and based on a lean meat protein. One of the most important things a dog owner must do is select the right diet for their dog. Once this task is complete, it is then necessary to determine how much of the food the dog should eat per meal. Though this may seem like a daunting task, the best dog foods for German Shepherds provide owners with a starting point through the suggested serving sizes listed on their packaging.

The German Shepherd is both active and athletic. If sufficiently exercised and fed in appropriate amounts each day, this dog type should not become overweight. However, since the German Shepherd can be predisposed to developing hip and elbow dysplasia, maintaining a healthy body weight is critically important. For this reason, free feeding is strongly discouraged, and all food should be carefully measured and monitored.

The German Shepherd is one of many breeds that can be predisposed to developing the life threatening condition called bloat. Though experts are uncertain what factors must combine to result in this issue, it is believed that eating too much and too rapidly may be partly to blame. To prevent this from happening, the German Shepherd should be fed a large breed food formulation if possible as these types of diets contain big enough pieces of food to encourage slow and thoughtful chewing and swallowing.

The busy German Shepherd thrives on a high quality diet that is based on a lean, meat-based protein. The best dog foods for German Shepherds include a whole meat or meat meal as their foundational ingredient. By-products are commonly used by many commercial dog food companies as they are an inexpensive source of protein that is derived from meat. However, this type of protein is taken from cuts of the animal that are less desirable for human consumption, and thus, are not the ideal choice for the active German Shepherd.

Other protein sources often seen in dog foods are the plant-based proteins soy, corn, and wheat. These ingredients have been linked to allergies in many dogs and make a poor foundation for a high quality diet. Other ingredients that are sometimes utilized to improve a food’s appearance and shelf life are chemicals, derivatives, additives, fillers, artificial flavours, colours, and preservatives. These items offer no nutritional value to the German Shepherd, and foods containing them are best avoided.

From carbohydrates, the German Shepherd gains the fuel it requires for fluid digestive processing and a thriving immune system. The ideal source for these carbohydrates is fruits, vegetables, and whole grains. The main thing to look for in any included carbohydrate in a diet for the German Shepherd is the ingredient’s amount of dietary fibre and antioxidants. Dogs with sensitivities to grains may do best on a grain-free food.

Healthy fats contribute the essential fatty acids needed for optimal coat and skin health. These fats are best obtained from animal sources and include such foods as chicken fat and oily fish. Alternatively, some plant-based oils offer ample amounts of the required nutrients the German Shepherd must have.

In selecting the best dog food for the German Shepherd, here are some guiding principles to keep in mind: 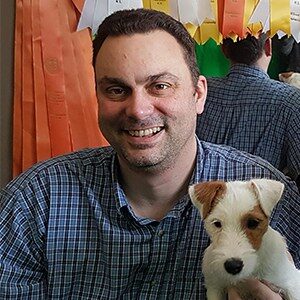 Jason Homan is a copywriter, editor, and Baptist pastor who makes his home in Cape Breton Island, Nova Scotia, Canada, with his wife Debbie and their seven dogs. The couple breeds award-winning Parson and Jack Russell Terriers under the kennel name Bristol Abbey. Active in their local dog community, Jason and Debbie participate in such events as conformation and dog performance sports and are also involved in rescue. They share their home with their four Parsons Branson, Bridget, Jackson, and Gigi and their three Jack Russells Beckham, Dior, and Posh.
Scroll to Top