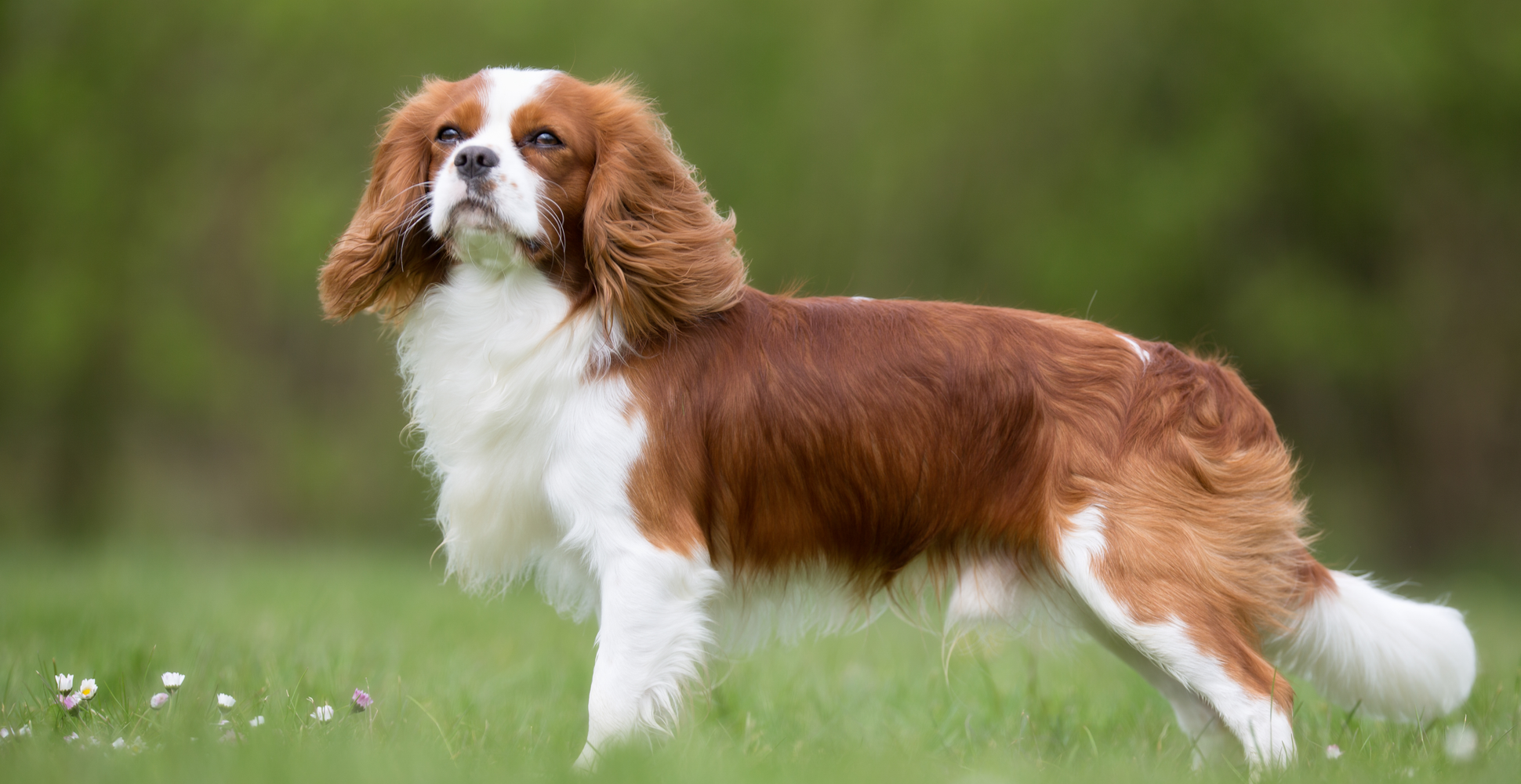 About The Cavalier King Charles Spaniel

Spaniel breeds are more commonly thought of as working dogs for shooting, but the Cavalier King Charles Spaniel has been bred purely as a companion dog. They still have the spaniel “look”, with long floppy ears and a medium-length soft coat, but their temperament is different from working breeds like the Cocker or Springer Spaniel.

Cavalier King Charles Spaniels are generally very affectionate companion dogs who enjoy spending time with their family. Once they get through the excitement of puppyhood, they are often gentle dogs, and if raised properly can be good with children. They still need exercise to keep them fit and well, but not as much as other Spaniel breeds.

There are some well-recognised health problems that Cavalier King Charles Spaniels suffer from, including a heart valve condition, and a spine condition called “syringomyelia”. There are efforts underway to reduce these conditions through selective breeding, but they remain a problem.

The ancestors of the modern Cavalier King Charles Spaniels were known as Toy Spaniels, bred from selected hunting spaniels to be good companions. They were popular with European nobility since at least the Renaissance, and famous figures including Queen Elizabeth I and Mary, Queen of Scots were known to keep them. The became particularly popular during the reigns of Charles I and Charles II of England, and so the breed became known as the “King Charles” Spaniel.

Despite the somewhat rocky reigns of these two monarchs, the King Charles remained a popular breed. Though they remained primarily lap-dogs, there are occasional mentions of them living up to their Spaniel heritage. The 1st Duke of Marlborough kept a pack of red-and-white King Charles Spaniels who were used for hunting, and apparently were fit enough to keep up with a trotting horse. The Duke’s residence was at Blenheim palace, and such was his success in breeding these dogs that “Blenheim” is still used today as an adjective to describe the modern chestnut-and-white Cavalier King Charles Spaniel.

In the 1920s, interest grew in trying to breed a type of King Charles Spaniel that looked similar to the older types of dog seen in paintings dating from that period. Roswell Eldridge, a wealthy American, offered prizes for the best examples of these dogs, which were to have “… [a] long face, no stop, flat skull, not inclined to be domed, with spot in center of skull”. The resulting dogs were dubbed “Cavalier” after the noblemen who supported King Charles I and II, and were recognised as a sub-type of the King Charles Spaniel.

The new Cavalier-type King Charles Spaniel hit a crisis during the Second World War. As food grew scarce, many people could not afford to feed both their dogs and their family. The numbers of Cavalier-types decreased sharply, but enough were preserved that the Kennel Club recognised them as a breed in their own right in 1945. Their recognition in the United States, however, took much longer, and it was not until 1995 that the American Kennel Club finally acknowledged them as a distinct breed from the King Charles Spaniel.

Today, they are popular in the UK, and regularly feature in the top ten pedigree breeds. They are less well-known in the US, but their numbers are on the rise.

Cavalier King Charles Spaniels are small dogs, but more solidly built than others in the Toy category. Healthy adults may weigh up to 13kg (28lb) but there is quite a bit of variation in size, so this would be considered overweight for some dogs. They usually stand around 30-33cm (12-13in) tall.

Centuries of breeding as companions mean that Cavalier King Charles Spaniels are generally affectionate dogs who enjoy spending time with all members of the family. Although they can be excitable, they are usually gentle dogs once grown, and can learn to live happily with younger children, though (as with any dog) they should never be left unsupervised together.

Cavalier King Charles Spaniels are usually quite outgoing and will enjoy meeting other people when out or welcoming them into the home. However, occasionally they can be slightly more nervous, especially if they have had a difficult start in life. Though their loving nature makes them poor guard dogs, they will often bark to alert their owners to new noises or perceived dangers.

Their strong for their family means that Cavalier King Charles Spaniels may be prone to separation anxiety. This means it is important that they get used to being left along for periods of time from a young age, starting with short periods of alone time (30-60 minutes) and then working up to longer periods. With adult dogs who suffer from separation anxiety, it may be helpful to speak to a qualified behaviourist to improve the situation.

Cavalier King Charles Spaniels’ eagerness to please (and love of food!) means that they are relatively easy dogs to train and will enjoy spending time learning new tricks. They can also be quite athletic for a small breed dog; their long legs and leaner frame means that they often do well in the small weight categories of Canine Agility competitions.

Cavalier King Charles Spaniels have a medium-length coat which should be brushed once a week to keep it tangle-free. The fur around their feet should also be kept trimmed, as otherwise grass seeds may become trapped and piece the skin between their toes.

Sadly, Cavalier King Charles Spaniels from several well-recognised health conditions. The most common one is a problem with the valves that separate the chambers of the heart – the mitral valve and the tricuspid valve.  In some dogs (but particularly Cavalier King Charles Spaniels) these values may become thicker and stiffer with age and start to leak. This makes it more difficult for the heart to pump blood around the body, and eventually leads to heart failure. The technical name for this thickening is “endocardiosis”, but it is commonly known as “degenerative valvular disease”. Medication is available to slow the progress of this heart disease, but sadly it is eventually fatal. More recently, surgery to replace these leaky valves has been developed, but this is still a rare and expensive procedure.

The other main health condition of concern in Cavalier King Charles Spaniels is called syringomyelia and causes fluid-filled spaces to develop within the spinal cord. This can lead to neck or back pain, and sometimes an itching sensation. Medication is available to treat the symptoms, as well as surgery for more severe cases, but there is currently no cure. Sadly, in severe cases the dog may have to be put to sleep due to the severe pain.

Cavalier King Charles Spaniels are often very people-orientated and love to spend time with their owner learning new tricks. Their intelligence and eagerness to please means that they are able to learn a wide variety of commands.

Cavalier King Charles Spaniels are gentle dogs by nature, meaning they are generally good with children, and younger members of the family can get involved in this training too! Their friendly, outgoing outlook means that are also often keen to show off what they have learned for your visitors.

For a toy breed, Cavalier King Charles Spaniels are quite athletic. Their trainable nature means that they can be found competing successfully in small breed Agility competitions, where their long legs may give them an edge over other breeds.

Cavalier King Charles Spaniels are not often used as working or service dogs, but can provide a great source of comfort, and can be trained as emotional support dogs. They can also be found in hospitals or nursing homes, working as therapy dogs.

Cavaliers might technically be Spaniels, but they left their days of flushing game birds out of shrubbery behind many generations ago. However, this does not mean that they are lazy dogs, and will still enjoy (and benefit from) daily exercise. They will generally be happy with 30-60 minutes of exercise per day but can easily do longer if they build up to it.

Even dogs who have degenerative valvular disease will benefit from regular exercise, and indeed this may help to keep their hearts healthier for longer. However, this should be done carefully and under the supervision of a veterinarian or veterinary cardiologist.

Young Cavalier King Charles Spaniels can be picky with their food, but this usually improves with age. Indeed, older Cavaliers are prone to obesity, especially after they have been neutered. It is important to monitor their weight, and reduce their food if they are gaining too much.

Dogs with degenerative valvular disease may benefit from a special low-salt diet, but this should only be fed after consulting a veterinarian or veterinary cardiologist.

Cavalier King Charles Spaniels are not common dogs to find in large rescue organisations, but there are some groups dedicated to ensuring that any Cavaliers who need rescuing can find a new home: 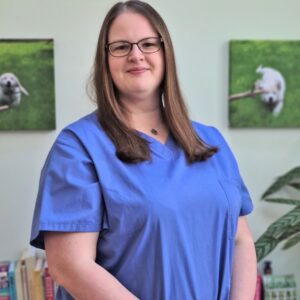