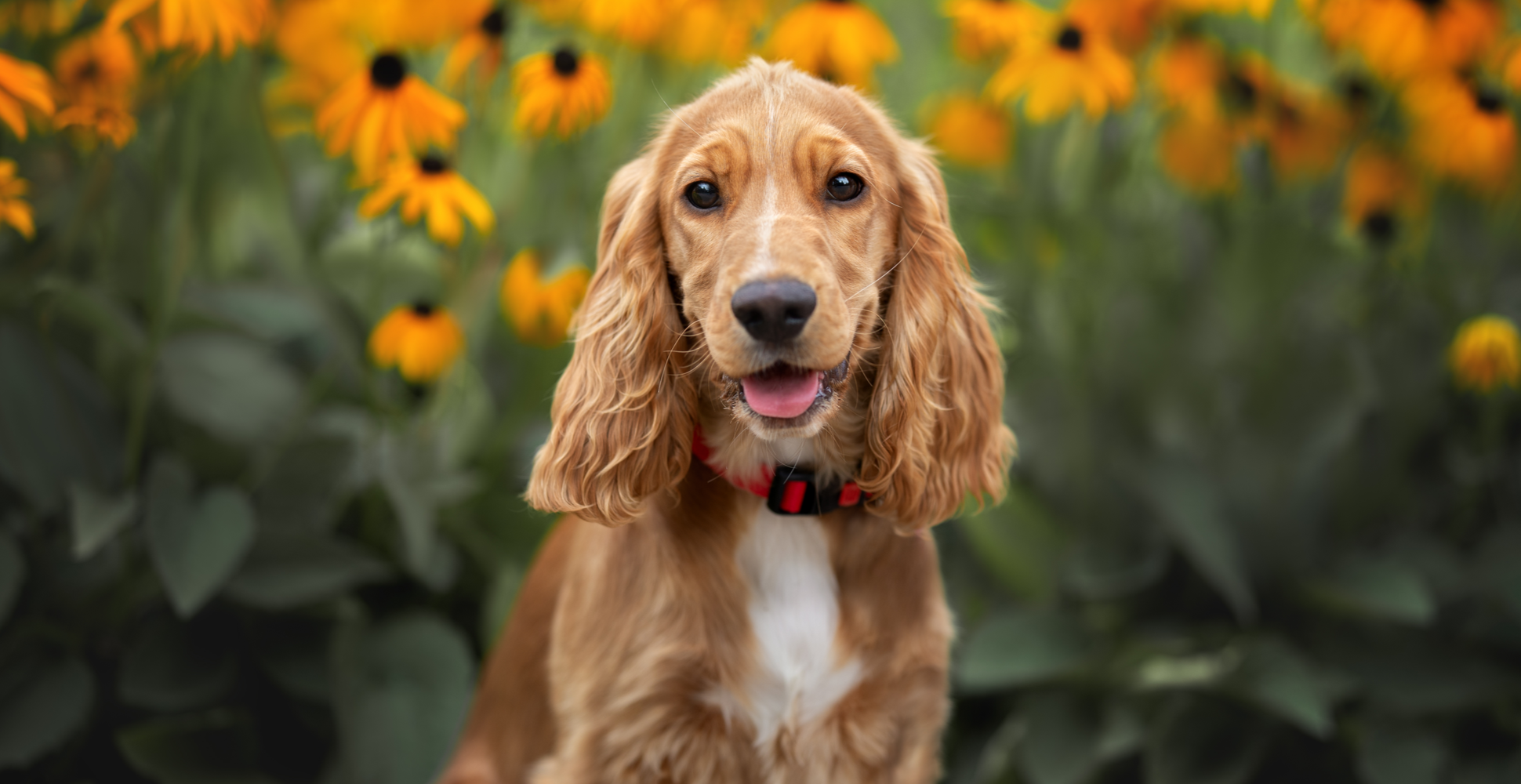 About The Cocker Spaniel

The Cocker Spaniel is one of the most popular breeds of dog and with their combination of intelligence, playfulness, and good looks, it isn’t hard to see why. They make a great family companion, especially for those that are active and spend a lot of time outdoors. They’re not afraid to get muddy and wet so may not be the best choice of dog for the house-proud!

Originally from a hunting background, these dogs love to be kept busy and can have endless amounts of energy. That said, after an active day, they love nothing more than to curl up on the sofa with their human family.

Cocker Spaniels are intelligent dogs and require significant mental stimulation, in addition to their daily exercise. Their beautiful coat requires a lot of maintenance, including regular trips to a professional dog groomer.

Spaniels are widely believed to have originated in Spain and the name ‘Spaniel’ is derived from the word ‘Spain’. However, it’s thought that the first Cocker Spaniels were bred in England in the 19th century to hunt birds. Before this, Spaniels were loosely grouped into either land spaniels or water Spaniels. It was only when breed standards, dog shows, and field trials were gaining popularity that Spaniels were classified into their different breeds, including the Cocker Spaniel.

The name ‘Cocker’ came from their specialty in hunting European Woodcock. These dogs were bred to utilize their sense of smell to find and flush out birds from undergrowth, allowing their handler to shoot the game. They were then expected to retrieve the downed game using a soft mouth so as not to mark the birds with their teeth.

Cocker Spaniels gained huge popularity in 1955 after Disney released the film ‘Lady and the Tramp’, featuring a Cocker Spaniel named Lady. They remain one of the most popular dog breeds in both the USA and UK.

Modern-day American Cocker Spaniels are smaller than their English relatives, with a shorter back and muzzle and a domed head. English Cocker Spaniels are taller than American ones and have a narrower chest and head. There is also now a second strain of English Cocker Spaniel known as a Working Cocker Spaniel, the original usually referred to as ‘Show-type’. As the name suggests, Working Cockers are bred for their working ability, rather than to a breed standard, so they can be variable in looks. That said, they are usually smaller and more slender than show-type Cockers.

Cocker Spaniels are the smallest breed of sporting dog. Full adult weight is usually between 20 and 30 pounds and adults will likely reach a height of 13-16 inches (measured to the shoulder). American Cocker Spaniels tend to be smaller overall than English Cocker Spaniels.

Cocker Spaniels are a friendly and social breed of dog. Traditionally known as ‘Merry Cockers’ due to their happy temperament and waggy tails, they love to interact with people and have an eagerness to please their human companions. Their gentle disposition can make them great with children but they are best suited to an active family who will spend lots of time outdoors whatever the weather!

Their popularity as a breed unfortunately means that they are often bred by unscrupulous people. Puppies from these types of breeders will often exhibit severe behavioral issues, even in the home of a well-meaning owner. For this reason, it is important to thoroughly research a breeder before committing to buying a puppy.

As a general rule, Cocker Spaniels can be a sensitive breed and will respond well to gentle training and commands. Even well-socialized dogs can sometimes be a bit nervous, and some will exhibit submissive urination.

Cocker Spaniels love to play, and this is a great way to bond with your dog. They are very intelligent dogs and will pick up new commands quickly. Originally working dogs, Cockers will thrive on being given a task and this makes them well suited to activities such as scent-work or obedience. Some are trained as assistance dogs and search and rescue dogs.

Even though they are energetic dogs, once they have been well exercised, a Cocker Spaniel will love nothing more than to snuggle up on the sofa with his human family members.

Cocker Spaniels are usually tolerant dogs and often adapt well to living with other animals in the household including cats. Most will still retain their hunting instinct and may be prone to chasing birds and rabbits when out on a walk though, so be sure to train a good recall from an early age!

Cocker Spaniels have beautiful coats but with this comes a lot of maintenance and expense. They require daily brushing as well as regular trips to a professional groomer once every 6-8 weeks. They can be prone to getting wet and muddy when out on a walk so be prepared for regular baths at home as well!

Working strains of Cocker Spaniel tend to have coats that are less high maintenance but will likely be more prone to getting dirty when out and about. Cocker Spaniels can shed their fur year-round so are not suitable for living with people who are sensitive to pet dander.

The average lifespan of a Cocker Spaniel is 10-14 years. Cocker Spaniels can be predisposed to several health conditions, some of which are genetic. This means that it is possible to screen breeding parents for these conditions to reduce the likelihood of them passing them on to their puppies. These genetic conditions include hip dysplasia, progressive retinal atrophy, cataracts, and glaucoma, and good breeders will have undertaken health tests to check for these in the parents before breeding them.

Cocker Spaniels are also more likely to suffer from allergies, ear problems, and some auto-immune diseases, than other breeds of dog.

Cocker Spaniels are very intelligent and have a strong desire to please their human companions. This makes them relatively easy to train and could be a good choice for a first-time dog owner. They can sometimes be a sensitive breed which means that gentle training is required, and they will not respond well to harsh training methods.

Cockers enjoy learning and have a strong ability to focus on a given task, meaning they thrive on activities such as agility, scent-work, tracking, and rally, either for fun or at a competitive level. Scent-work and tracking in particular are great activities for a Cocker Spaniel, giving them a chance to put that great sense of smell they were originally bred for to good use!

Cocker Spaniels can be prone to separation anxiety, so it is important to teach your dog to be left alone for short periods from an early age. They can also be vocal dogs and more likely to bark than some other breeds. If you are having problems, it is best to seek the advice of an accredited behaviorist as early as possible.

Cocker Spaniels are an energetic and active breed and require at least one hour of daily exercise as a minimum. Where possible, this should be off-lead. Working Cockers are bred for their high energy levels and usually require much more exercise than this.

All Cocker Spaniels love to use their brain, but mental stimulation is particularly important for working strains of Cocker as these dogs have energy to spare and can be difficult to tire physically. They can be prone to undesirable behaviors if they become bored so be sure to provide them with plenty of mental stimulation with food puzzles and training. Cocker Spaniels also love to play which is a great way to stimulate their brain and tire them mentally.

Cocker Spaniels require a good quality complete pet food which should be fed according to the packet guidelines. Requirements will vary according to your dog’s age and individual needs so talk to your veterinarian about a suitable diet and amount to feed your dog. Some Cocker Spaniels can be prone to obesity so it is sensible to take your dog for regular weight checks to ensure that they are not gaining weight.

If you have decided to welcome a Cocker Spaniel into your life, why not see if you can offer a rescue dog a loving home?

You can find the details of Cocker Spaniels in need of rehoming here on the Spaniel Aid website:

Spaniel Assist is another UK group dedicated to rehoming Cocker Spaniels of all ages: 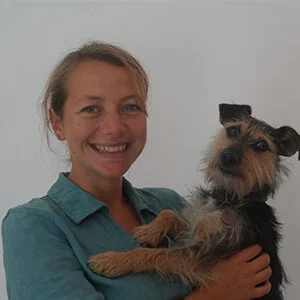