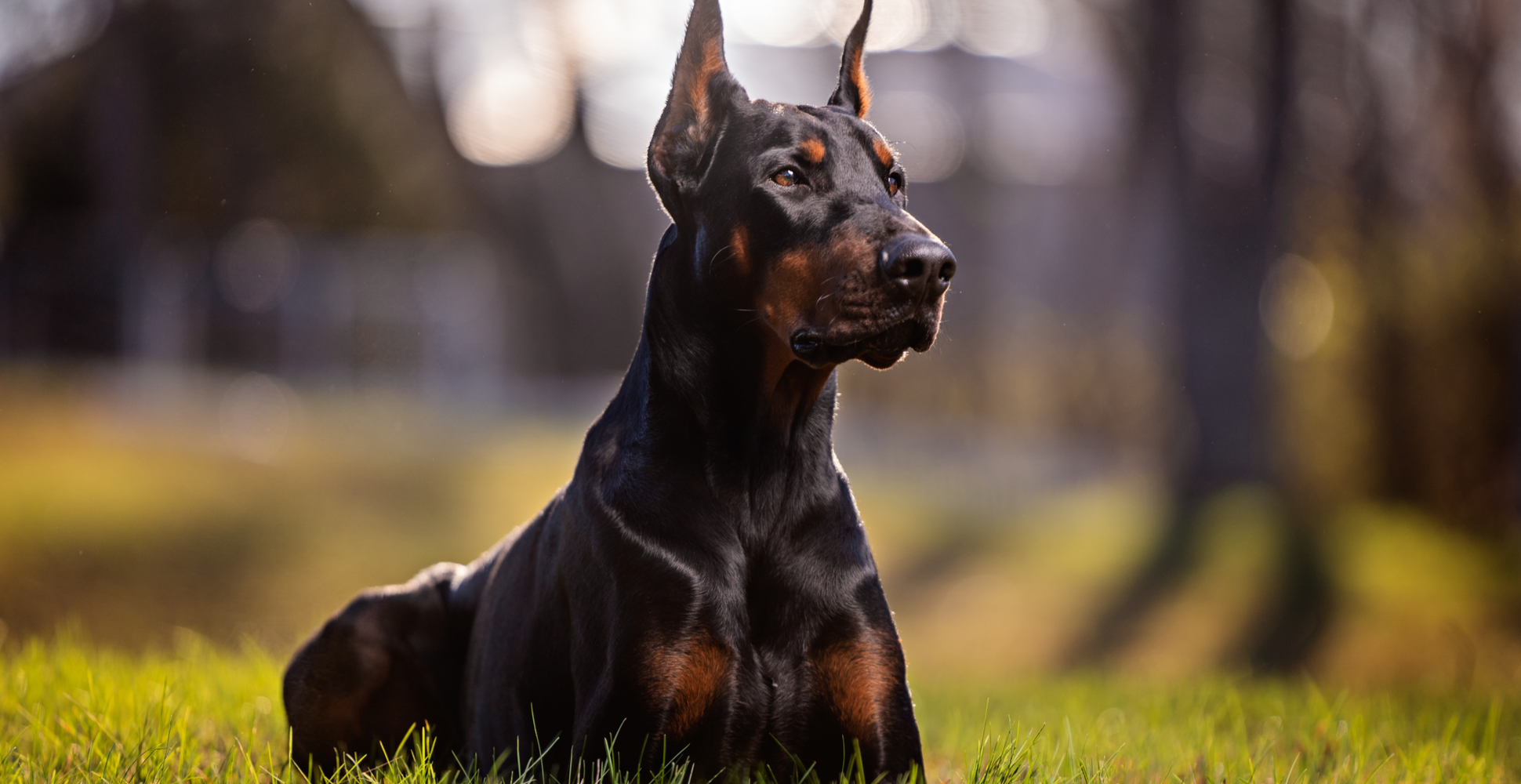 Dog Breed:
Doberman Pinscher
Breed Group:
The working breed group
Characteristics:
Intelligent, loyal, protective, athletic. A sleek-looking dog, with a long nose and almond eyes.
Height:
Male 26 – 28 inches, 24 – 26 inches female
Weight:
Males 75 – 100 pounds, females 60 – 90 pounds
Life Span:
10 – 12 years
Coat Colors:
Recognised breed standard colors are black and rust (most common), blue and rust, fawn (Isabella) and rust, and red and rust. White is another color variety.
Area of Origin:
The breed was developed in Apolda, Germany by a tax collector called Louis Dobermann. He wanted a large, fierce dog to help him with his work and protect him whilst he was working. The breed was recognized by the German kennel club in 1899.
Best For:
Owners that can put time and energy into training and exercising. This is an active, intelligent dog that needs plenty of stimulation.

About The Doberman Pinscher

This breed is intelligent and usually easy to train in the right hands. They will do best in the hands of experienced dog owners. This dog will also enjoy activities such as agility and obedience training.

The Doberman can make a good family pet, despite being used as working and guard dogs, as they are very sociable and obedient. They will form strong bonds to their owners and are loyal and protective.

They are very athletic and will require plenty of exercise. Long walks and plenty of mental stimulation with play and training can help keep any mental frustrations at bay. They will be suited to a home with plenty of space and a large garden.

The Doberman Pinscher was bred as a protective dog in the 19th century by a tax collector in Apolda, Thuringia, Germany, called Louis Dobermann (after which the breed is named, though the second ‘n‘ was dropped at some point in time). He wanted a large dog to help ward off any potential robbers whilst out on his collection rounds. He ran the Apolda dog pound and therefore had access to a variety of different dogs, from which to breed the optimum dog for his needs.

The Doberman is derived from a mixture of breeds thought to include the German Pinscher, Weimaraner, Greyhound, Manchester Terrier, Rottweiler, and the German Shepherd. The exact mix and ratios are uncertain though. This created a dog that has the right combination of athleticism, intelligence, and bravery. The breed was later recognized by the German kennel club in 1899.

Many countries have dropped the ‘pinscher’ part of this dog’s name over time, as Pinscher is the German word for a terrier. Given the large size of this breed, it no longer describes the dog all that accurately. The US and Canada are the only countries that still use the pinscher part of the name.

The breed was utilized by the U.S. Marine corps in World War II helping to elevate its fame. There is a statue in Guam in the war dog cemetery at the US naval base in Orote Point as a monument to the breed. The statue is a life-size model of a dog called Kurt, a Doberman that was mortally injured by a Japanese grenade. 25 Doberman pinschers’ names are inscribed under the statue, including Cappy, a Doberman that saved the lives of 250 US soldiers when he alerted them to advancing Japanese soldiers.

This relatively new breed of dog has become a very popular one, and since its registration with the American Kennel Club in 1908, the Doberman has become a regular in the show ring as well as in working roles. Its athleticism and intelligence mean it is often used in the armed forces and police, as well as in guard dog roles.

Doberman Pinschers were one of the breeds used in search and rescue at Ground Zero in New York City after 9/11. It is one of the most popular working breeds in America and continues to have a strong fan base.

Dobermans are a large dog breed, often 26 inches at the withers. They can weigh more than 100lbs (45kg), although the average weight for males is 75 – 100 pounds and females is 60 – 90 pounds. This is a muscular and well-built breed, but sleek and powerful looking.

Doberman ears are usually floppy in appearance, but may be ‘cropped’ – this involves cutting off the ear flap to make the dog appear more aggressive. This practice is illegal in many countries as it’s done for aesthetic purposes only, and does not benefit the dog.

The Doberman is a sleek-looking dog that carries itself proudly. They are an intelligent breed, that can at times appear aloof, but they usually make good pets due to their trainability. In the right hands, they are very obedient dogs and usually willing to please.

Dog training classes can help with training and can provide more novice owners with useful tools and advice. Even experienced Doberman Pinscher owners will benefit from classes, as they will provide an excellent way of socializing your dog with new people and other animals.

This breed is very athletic and will require plenty of exercise. Without ample physical activity, Doberman Pinschers could become frustrated and destructive. As well as long walks, this dog will benefit from games and toys that stimulate him mentally. This dog was originally bred for work and therefore wants to be kept busy – in both body and mind. The right owner will lead a naturally active lifestyle and be able to encourage further stimulation through training and play.

Despite their tough appearance, this dog usually does best in the company of people and shouldn’t be kept solely outdoors. They are sociable and enjoy living in the house with their family. They are protective and loyal and usually make good family pets.

Dobermans are loyal and enjoy being near their humans, so they are prone to suffer from separation anxiety if left alone for long periods. You should build short periods of alone time into your training program with them so that they get used to this gradually.

Doberman Pinschers have a short coat that requires little in the way of grooming. The coat does shed, so you will find dog hairs around the house, but these will be less obtrusive than some other breeds. The occasional brush will help get rid of any loose hairs and help keep his coat looking shiny. Dobermans don’t need regular bathing either, only if they get especially muddy or dirty.

There are certain inherited health complaints that the breed is susceptible to. Hip dysplasia is common, which is a condition that affects the normal development of the hip (ball and socket) joint, which can lead to painful arthritis and lameness.

Dilated cardiomyopathy (enlarged heart), von Willebrand’s disease (a blood clotting disorder), and progressive retinal atrophy (a condition affecting the eyes) are all seen in this breed too. Genetic testing of breeding animals is advised to try and reduce the risk of some of these traits being passed on. Try to seek out breeders that have carried out these health screens to increase your chances of buying a healthy puppy.

Although not an inherited illness, being a large deep-chested dog, this breed is prone to gastric dilatation-volvulus (GDV) which is bloating, with a possible twisting or torsion of the stomach. This is an emergency that requires immediate veterinary attention. If you are considering a Doberman puppy, you may want to talk to your vet about a ‘gastropexy’ procedure, which prevents torsion.

This breed is usually easy to train, as it is very keen to please its owners. They are also naturally playful and inquisitive, so ensure all of the training you do involves plenty of positive reinforcement and praise. Doberman pinschers are very clever and will pick up commands easily in the right hands.

Being a large breed of dog, you will want to ensure you have good control of them with basic obedience training being a starting point. Consider attending puppy training classes from an early age to get the foundations right. You don’t want a large powerful dog that pulls you around on the leash and is generally difficult to manage.

Ensure your dog is well socialized from an early age too. Introducing them to a variety of different people, dogs and situations from a puppy will help make sure they are well-adjusted and less likely to be aggressive in unfamiliar circumstances.

Doberman’s have retained much of the intelligence and willpower required to do their original job of protection. This may need redirecting into another ‘job’ to provide enough stimulation. Consider specialist training or advanced obedience training.

This breed is athletic and will need plenty of exercise, at least 2 hours a day. They will be good dogs for people that lead active outdoor lifestyles, and will happily go for treks or runs with their owners. As such a large breed, it can be hard to get them to exercise fully, and some off-leash exercise may be necessary.

They will benefit from having a large garden or yard to play in as well as their long walks. Given their intelligence, they will also enjoy playing games and using stimulating toys or puzzle feeders.

Consider agility or obedience training to help keep them mentally stimulated as well as providing them with another outlet to burn off some energy. Canicross may also be a good option for this breed.

You should ensure that you are feeding a complete dog food specifically for large breeds. This diet should also be age-appropriate, as this will be formulated specifically to your dog’s needs at each life stage. Large-breed puppy food is the best choice for growth, as it contains the correct calcium-phosphorus balance to reduce the risk of bone diseases in larger breeds.

This isn’t a breed known for obesity. However, as with all breeds of dog you should monitor their body weight and condition. You should be aiming to have a lean fit dog, with ribs you can easily feel and a nipped-in waist. Ask your vet if you aren’t sure.

Treats are fine to use in moderation for training, but be careful not to overdo them. Fresh drinking water should always be available.

There are several Doberman Pinscher rescue groups in the UK, aimed at raising money for the breed and for rehoming dogs whose owners could no longer care for their needs. The following is a list of just a few of those groups – 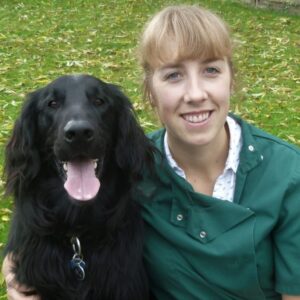